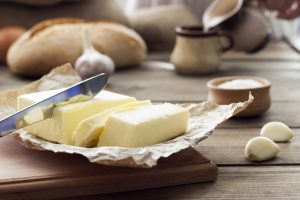 Western Canadian Dairy producers have seen unprecedented growth in quota over the past couple of years. The stigma of fat being unhealthy has begun
to dissipate as new research comes to light and thus has contributed to growth in the consumer demand for butterfat.

The demand for more butterfat has also resulted in more skim milk being produced, resulting in a proposed national ingredient strategy to encourage processors to use more skim milk by creating a lower-priced class of dairy ingredients known as Class 7.
Thus, the western milk marketing boards will be shifting more of the value onto butterfat, which should encourage producers to ship a higher percentage of butter fat and reduce the amount of skim off being produced on farms.

The Butter-nomics of increasing percent butterfat on your dairy:

What it means for your dairy:

The focus on fat is here to stay. Genetics play a key role. Even though genetic improvements are not immediate the sooner you make it a focus the sooner you will see results.

WestGen is here to help!

On other key traits the group also offers impressive improvement alongside this extreme Fat focus. In addition, four out of the five sires are Robot Ready™ and three are Immunity+™ sires.

Take advantage of the Focus on Fat initiative during September and October!

Talk to your WestGen Genetic Advisor to learn more about how you can adjust your breeding program to deliver more of the fat you need.