The 2014 WestGen 4-H Fundraiser was a dairy genetic raffle organized by WestGen with 5 prizes valued at $10,000 in total. Western Canadian dairy 4-H clubs sold tickets for a $10 donation directly to their club, and the support from fellow farmers, family and friends was substantial, with numerous clubs earning over $1000 from their efforts. The prize draw was held on August 23, 2014 at WCC, where there were 4-H members from across the region present. Norm McNaughton, the President of the Semex Alliance Board of Directors was in attendance at the show and had the honour of drawing the 5 ballots. 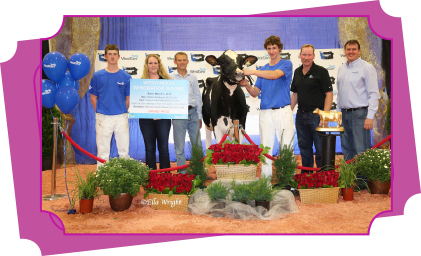 Thanks to all ticket purchasers that supported this promotion and their local 4-H members, the leaders of the dairy industry of tomorrow!